On 17 October, the padkos bioscope will be screening The Economics of Happiness (68 min), a 2011 documentary film directed by Helena Norberg-Hodge, Steven Gorelick, and John Page, and produced by the International Society for Ecology and Culture. It has won “Best in Show” at the Cinema Verde Film and Arts Festival, “Best Direction” from EKOFilm 2011 (Cech Republic), “Judges’ Choice” and “Audience Choice” at the Auroville International Film Festival (India), an “Award of Merit” from the Accolade Film Festival, and several other awards. (http://en.wikipedia.org/wiki/The_Economics_of_Happiness)

Economic globalization has led to a massive expansion in the scale and power of big business and banking. It has also worsened nearly every problem we face: fundamentalism and ethnic conflict; climate chaos and species extinction; financial instability and unemployment. There are personal costs too. For the majority of people on the planet, life is becoming increasingly stressful. We have less time for friends and family and we face mounting pressures at work.

The Economics of Happiness describes a world moving simultaneously in two opposing directions. On the one hand, an unholy alliance of governments and big business continues to promote globalization and the consolidation of corporate power. At the same time, people all over the world are resisting those policies, demanding a re-regulation of trade and finance—and, far from the old institutions of power, they’re starting to forge a very different future. Communities are coming together to re-build more human scale, ecological economies based on a new paradigm – an economics of localization.

The film shows how globalization breeds cultural self-rejection, competition and divisiveness; how it structurally promotes the growth of slums and urban sprawl; how it is decimating democracy. We learn about the obscene waste that results from trade for the sake of trade: apples sent from the UK to South Africa to be washed and waxed, then shipped back to British supermarkets; tuna caught off the coast of America, flown to Japan to be processed, then flown back to the US. We hear about the suicides of Indian farmers; about the demise of land-based cultures in every corner of the world.

The second half of The Economics of Happiness provides not only inspiration, but practical solutions. Arguing that economic localization is a strategic solution multiplier that can solve our most serious problems, the film spells out the policy changes needed to enable local businesses to survive and prosper. We are introduced to community initiatives that are moving the localization agenda forward, including urban gardens in Detroit, Michigan and the Transition Town movement in Totnes, UK. We see the benefits of an expanding local food movement that is restoring biological diversity, communities and local economies worldwide. And we are introduced to Via Campesina, the largest social movement in the world, with more than 400 million members.

We hear from a chorus of voices from six continents, including Vandana Shiva, Bill McKibben, David Korten, Samdhong Rinpoche, Helena Norberg-Hodge, Michael Shuman, Zac Goldsmith and Keibo Oiwa. They tell us that climate change and peak oil give us little choice: we need to localize, to bring the economy home. The good news is that as we move in this direction we will begin not only to heal the earth but also to restore our own sense of well-being. The Economics of Happiness challenges us to restore our faith in humanity, challenges us to believe that it is possible to build a better world. 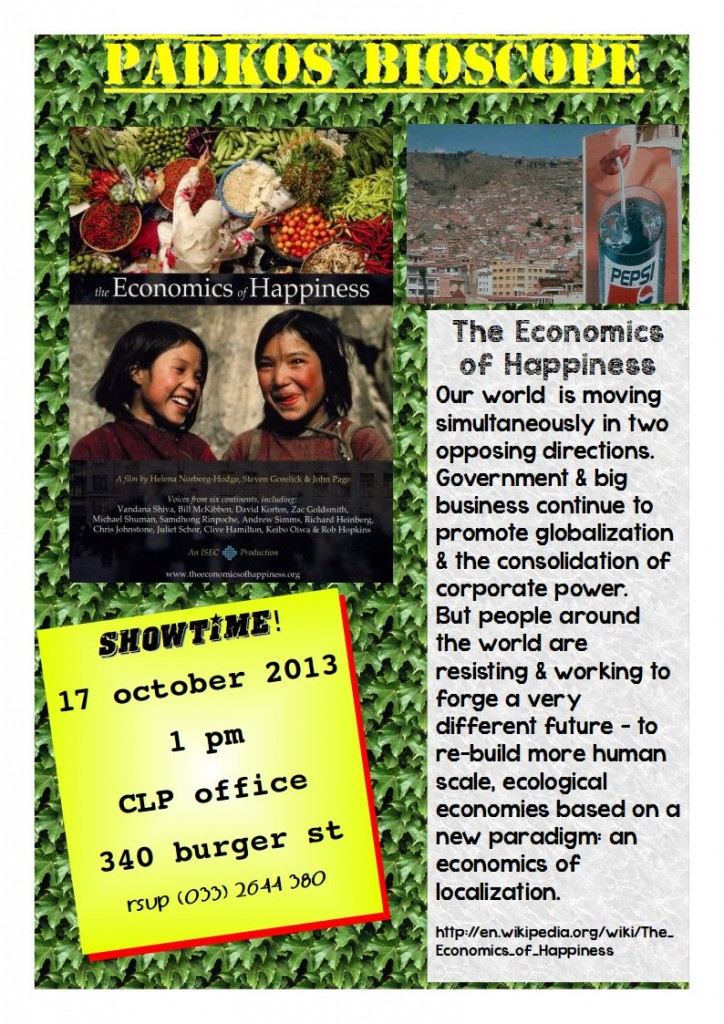