Do not miss the final movie in the current bioscope series!

On Thursday 20 June we’re screening The House-Warming Party – Dia de festa. Four women leave the Brazilian countryside & head for the big city in search of a better life. After struggling on the streets of São Paulo, they encountered each other and a movement (MSTC) that gave them a strong reason to live. They became key leaders of the Movimento Sem Teto do Centro – Movement of the Homeless in Central Sao Paulo. The documentary tracks the mass occupations of a number of empty buildings during one night as seen through the eyes of these women. 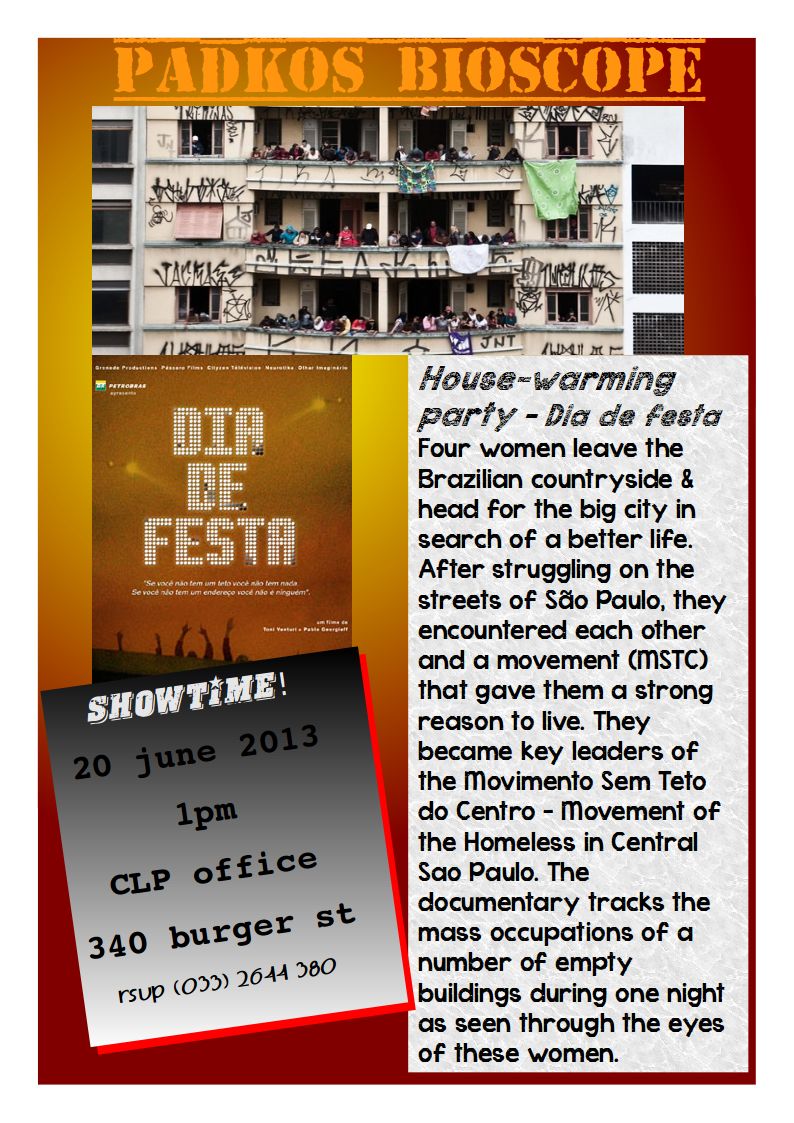 Big thanks to all who could join us for the phenomenal launch of padkos inter_mission!

On Sunday, June 2nd, friends and comrades of CLP were serenaded by the tunes of the Tananas and others, in an inspirational venue that provided rest and food for the journey. The gig kicked off with an explosive but tight set from the seriously impressive UKZN Jazz Legacy Band. If a tension between discipline and creativity is at the heart of jazz, this young crew completely nail it! The thirty or so of us who made up CLP’s inter_mission group spent the break before the next set with Rainbow-founder, Ben Pretorius. Ben shared the inspirational story of a venue that became part of the struggle against apartheid. And finally Steve Newman and Lu Dlamini took the helm for the closing set on a very special day. For long-time fans of Tananas this was quite a moment – not since the murder of bassist, Gito Baloi almost ten years back, have we heard these tunes played live! Newman (acoustic guitar), with Lu Dlamini (vocals), Paki Peloeole (drums) and Jimmy Mngwandi (bass) paid respectful dues to that memory – and built atmosphere through the afternoon, closing, as all the best Rainbow gigs do, with people dancing a conga-line between the tables. Even the current owner, Neil Comfort, write us afterwards agreeing that we “really did luck into a really special show and afternoon at the Rainbow”. Viva padkos inter_mission, Viva!

See some pics from the gig at www.churchland.org.za