Hunger is a scandal. It robs people of dignity and life. A large proportion of the people in South Africa experience hunger daily but this experience is generally privatised within households and politically disarticulated. Women and children, and orphans in particular, are most vulnerable to hunger. CLP works with groups of women whose members have not eaten for days and also with groups who provide food for orphans and other vulnerable people on an entirely voluntary basis.

Food sovereignty concerns both people’s right to eat well and their right to land and resources for ecologically sound production. It is about their right “to control food and agricultural systems and policies, ensuring everyone has adequate, affordable, nutritious and culturally appropriate food”. And it “wrests control over our commons” from markets and corporations and puts it “back into the hands of the people”.[1]

As part of its core process, CLP already facilitates the connection of several rural groups with the skills of organic food production provided by Biowatch. It also facilitates exchange visits and skill sharing between groups. It will extend this to support urban agriculture in response to requests. Women in some AbM settlements have expressed interest in urban agriculture as an expression of food sovereignty but this is still to be given real form.

Through its engagement with people’s struggles, and in response to their decisions, CLP may identify projects related to the expansion of food sovereignty as a particular instance of a broader agenda for people’s sovereignty. 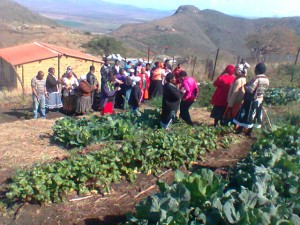